There is a rise of indicators. The so called data revolution is finding its feet, so I  do not expect it to let up anytime soon.  The Economist provided one overview in their report on ‘How to lie with indices‘. 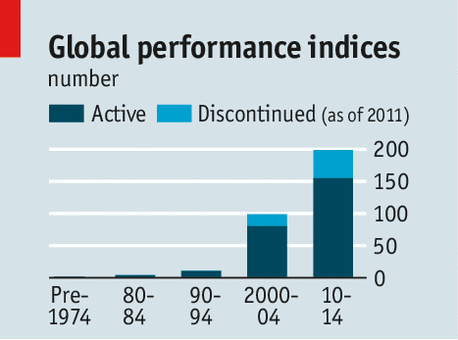 As one would expect there is now a ballooning literature to match the rise of indicators. The early and leading contributions in this literature emerged from  Law and Anthropology (sometimes cross-disciplinary work), but now International Relations and Political Science is following. Economics is as far as I can tell still on the sidelines.  Anthropology and ‘Constructivism’ within International Relations has a natural comparative advantage in approaching data as social products. On the other hand, economists, statisticians and political scientists of the positivist mold, have a mountain to climb.

I hope there will be a gradual shift in all disciplines towards approaching indicators critically as ‘products’ rather than the mainstream approach of being uncritical consumers of indicators. All these indicators are entering the realm of ‘as if’ governance.

We all know, I hope, that the Freedom House actually does not measure ‘democracy’;  that the Consumer Price Index does not actually measure ‘inflation’; nor does Transparency International actually measure ‘corruption’. We just pretend ‘as if’ they do. We are in deep trouble if we forget that we are making decisions or doing analytic research ‘as if’ these things could actually be counted.

Despite the many publications I think there are still many holes in our knowledge. There is a further need for empirical research on the lines of ‘political ethnography of indicators’. Particularly is there a gap in theory and empirical studies on the line of causality from ‘data’ to ‘decisions’. There is also a surprising gap on knowledge of what makes a good indicator, and what does not.  Here’s a sample of books coming in 2015 and 2016.